When we left on our trip, we were armed with only a bunch of ideas, a guide book, our airline tickets, 1 small backpack each. No checked luggage, no advance bookings.

Starting the trip, we were expecting the typical mediocre flight, and began to expect the worst when we arrived at the airport to find our airline didn’t have any of the automated check-in kiosks we’ve become so used to. We stood in line for about an hour to finally check in, and our hearts sank a little further when we received boarding passes with row 82 on them. EIGHTY TWO! Do they even make planes that long? Were we sitting on the tailwing? 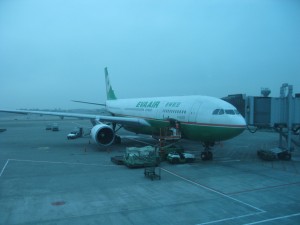 Turns out 82 is a very good row when you’re in a 747 with EVA Air! They have their airplanes configured so the upper deck of the 747 is still economy class. There are only about 10 rows up there of 3 & 3. There’s plenty of storage, including a bonus space of side-stowage next to the windows, and with so few people it’s really quiet. Score.

If you’re flying from here to Asia, I’ll heartily recommend EVA (hub in Taiwan). The plane was clean and comfortable. The food was highly edible. The service was lovely (especially the attendant who brought us earplugs when there was a screaming child for a few hours) and the price was certainly right.

After an uneventful flight, we landed in Bangkok and found our way to the taxi stand. Our plan was to head to the train station and catch the night train to Chiang Mai to spend the first week of our trip in the North.

We’d done a lot of reading about transport in Thailand, and were ready when the Taxi driver (as expected) didn’t turn on his meter, and tried to take us out of the way to his “friend’s business” to sell us train tickets, instead of to the train station.

We didn’t manage to insist on the meter, and paid about 550 THB for a 300 THB ride (about $7 too much), but we did persevere and insisted on buying our tickets at the train station. Not too bad for our first attempted hosing. And we weren’t taken in again by anyone else.

The train station is very near to the Chinatown area of town, and we had about 5 hours to kill before our train boarded, so we ditched our bags at the luggage holding area and wandered off to explore.

Bangkok, especially Chinatown, is… not for the newbie or the faint of heart. It is busy and loud and chaotic. The sidewalks are covered in food stalls and sidewalk vendors. But don’t walk in the streets, that’s just suicide with the array of trucks, cars, scooters & tuktuks whizzing by in a crazed ballet where lines on the road are just suggestions. We lasted a few hours in the heat and mayhem, and headed back to the train station to wait the last couple hours before our train left.

The train ride was one of my favourite parts of the trip. The State Railway of Thailand is the longest metre-gauge rail system in the world, and a very efficient and economic way of getting around the country. We booked a 1st-class sleeper car for about $70 for the two of us to make the overnight journey.

We had our own car with a couch that folded up into bunk beds. We had dinner & breakfast service, sheets and pillows delivered to us and collected in the morning. It further solidified my love of rail travel. Don’t worry, that all gets torn apart in a future story. Next though, our week in Chiang Mai.

One thought on “Thai Travelogue Part 1: Bangkok to Chiang Mai”