Over the weekend, Neil and I headed to the Summertown Farmer’s Market. Partly to check out what was on offer, and partly to partake in a (delicious!) pulled pork sandwich from Shredded Meat Co. who are setting up shop there each weekend this summer. 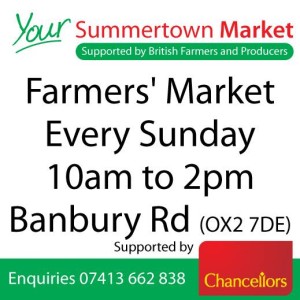 The market was lovely, and most businesses along the strip where it’s set up looked like they were doing a roaring trade, encouraging visiting marketgoers to pop through their doors as well.

All except one: The Dew Drop Inn.

And, as we soon discovered, for good reason.

We thought, you know what goes really well with a BBQ sandwich? A cold beer. So over to the pub’s patio we went.

The way the street is set up, there is a big plaza-style pavement, and the pub’s front garden space extends through it, all the way to the street. There’s probably seating for about 50 people out there. You actually need to walk through the garden if you want to cross the pavement frontage. The market was set up down the pavement on both sides.

While there are over a dozen food vendors at the market, many selling takeaway meals, there aren’t any beverage vendors. Anyone who wants to have a market lunch and fancies a drink with it needs to go into one of the grocery stores along the block to pick something up.

Or (as we did) go into the pub and purchase a couple pints.

Except, instead of capitalising on this opportunity to gain some customers and sell some drinks, we got a surly publican chasing us off their entirely deserted patio, for having ‘outside food.’

Fair point, you say, the pub serves food. If you want to use their tables, you should purchase their food. And if that’s the attitude one wants to take take, in a world of black and white, and curmudgeonry, sure. Point made.

But, in a world where pubs are generally struggling, and where most business people (I would think?) would welcome an increase in traffic, and a chance to make a good impression to generate repeat business on non-market days, perhaps some out-of-the-box thinking could help?

Were it my (nearly completely empty, inside and out) pub, I’d see the market as a huge potential. I’ve got the only reasonable seating area for market-goers, and I’m the only one, aside from the grocery stores, selling drinks.

I’d grab some colourful bunting, and section off a few of the tables that market-goers need to walk directly through, to be used for those who purchase food at the market and drinks from my pub. You can’t just park there with a random picnic, but market food +my drinks = ok. The only way market-goers are going to get a table to eat at, is going to be by buying drinks from me. The market vendors and I both win!

But what of the pub food, you ask? Two separate groups of customers. There was not one ounce of crossover between the food available at the market, and the pub’s menu. And I’m pretty confident that someone who’s heading for a farmer’s market lunch isn’t going to be suddenly swayed into having a Sunday roast.

In fact, a really enterprising publican might work with the market organisers to specifically advertise some complimentary snacks to go along with the market food. Maybe a jacket potato to go with the huge Paella that the fishmonger is cooking up? Or a side of chips for with your pulled pork sandwich?

But hey, I suppose that if your idea of a good time in pub ownership is to take a protectionist stance and enjoy chasing ‘rule-breakers’ off your property, that’s your prerogative.

But it’s also mine to decide not to return to the Dew Drop (where I have previously enjoyed both drinks and Sunday lunch), and take my dollars to a pub that’s more interested in generating some goodwill, both in the community, and with its current and potential patrons.