I am shamelessly copying so many better bloggers that have gone before me down the path of motherhood by writing you an online letter, but I can’t think of a better way to share what life has been like with you so far. So here we go.

It seems like the past two months have simultaneously flown by, and like it’s been this way forever. 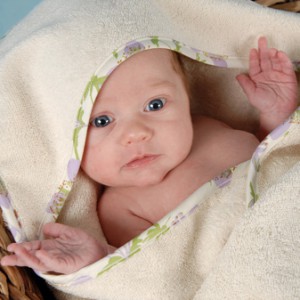 You are fascinating. Watching you figure out the world around you and take it all in is stunning. Especially so in the past couple weeks, as you’ve transformed from being a benign (and adorable!) lump to becoming much more interactive and having quite a personality. You have opinions, not about anything critical (mostly whether you’d rather bounce or swing your way into a nap, or whether to eat quickly or slowly), but still, I am constantly amazed that you are really a real, tiny human.

So considering there are now three of us working together at this crazy thing called life, it’s nice to feel like we’ve all really started to gel as a family as days are settling into something resembling a routine.

You wake up in the mornings any time between 5 and 6 am, and Dad grabs you and brings you into our room for your breakfast, then starts the coffee. The three of us hang out for an hour or so before he heads off to work. Then you and I get up for your second breakfast. You eat like a Hobbit!, next up is elevensies.

Between second breakfast and elevensies you usually take a nap, which I am extremely grateful for. This is when I get to shower, and deal with one or two of the small mountains of laundry you create. 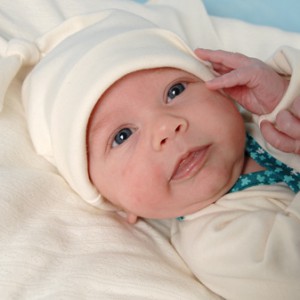 Speaking of the laundry, let’s talk more about that for a moment. The volume of spit-up you generate is becoming discourteous. I worked hard to provide you with that meal. And if you’re not going to keep it in, at least don’t add insult to injury and demand more after ejecting most of your meal. The well is dry kid, better luck next time.

Aside from that, though, you really are pretty chill, and once you’ve eaten (again) it’s usually time for adventure! This is when we head out into the world for a walk, a workout or to visit with friends. You’re comfortable almost anywhere and happy to be passed around and cuddled by anyone who’ll have you. You charm everyone with your little rosebud lips and big, blue eyes.

In fact, one could go so far as to say you’re really, really, ridiculously goodlooking. Because of this, your early reluctance to turn to the left as well as the right, and your recent experience as a model for a local baby clothing company, your Auntie Ki has dubbed you “Zoo.” I’m sure you will develop a taste for orange-mocha frappucinos and grow up to do great things for kids who can’t read good, though I hope your friends are spared the fate of perishing in a tragic gasoline fight accident. 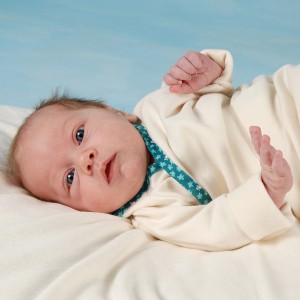 But back to the present – I do wish you’d succumb to a nap when the afternoon sleepiness hits that gives you big yawns, heavy eyelids and a fierce temper, but we soldier on until your dad gets home, when you bust out the biggest smiles of the day! That’s right, you’ve also started to give us big, open-mouthed, big-eyed grins. I’ve tried to catch them with the camera, but so far you’re just too quick!

With the lack of afternoon nap you do get a bit frantic as the evening wears on, and a walk in the Ergo with Dad and the dog is usually enough to calm you down and get you ready for bed.

This is probably very odd for a new parent to say, but I think you are my favourite in the middle of the night. You wake up a couple of times to eat, and you are all business. Your Dad goes to fetch you from your room, and though you’ve been fussing, you quiet down as soon as he walks in. Your eyes are so wide, and you are so still as you endure the routine of a diaper change and head in to the bedroom to eat, which you tackle with the focus and seriousness of an olympic sharpshooter. Then, as soon as you’re done, you pop your head back, throw your arm over your eyes in dramatic fashion, and drift back to sleep.

Before I know it, morning comes and we do it all over again.

I wasn’t sure how I’d feel about being a Mom, but even though it’s only been two short months, it seems pretty great so far. That could be the delusion brought on by a lack of sleep, but whatever it is, I’ll take it. I hope I keep finding little things to enjoy about you when you’re being a terrible two-year old or surly teenager.

But even then, it’s pretty clear that you’ll always be my little Monkey Toes, Captain Pouty-Face, Tiny Baby.

One thought on “Two Months”