Did you know Anti-social means something entirely different here? I much prefer the UK definition.

Here, anti-social behaviour is something that actively goes against society. Something that disturbs the peace, and negatively affects the neighbourhood. Noise complaints, public drunkenness, vandalism – anything that blights the quality of individual and community life.

I’ve been trying hard to figure out a way to explain one of the key differences between life in the UK and life in North America, and the huge difference in the interpretation of the term ‘anti-social’ pretty much sums it up.

Because in North America, anti-social doesn’t mean ‘against society,’ it means opting out of it.

There isn’t really a great catch-all term in the US or Canada to describe what people here would call anti-social behaviour.

But there are, sadly, so very many ways to talk about opting-out of society.

I’ve just finished reading Emily Matchar’s “Homeward Bound: Why women are embracing the new domesticity,” which manages to put into words everything that was irritating me about parenting in Vancouver, that I couldn’t quite articulate:

It’s all very academically obvious, when you look at charts like this one from the Pew Institute, that show how different Americans are to Europeans when it comes to how individualistic they are as a nation, and how much of a role they think the social safety net should play. 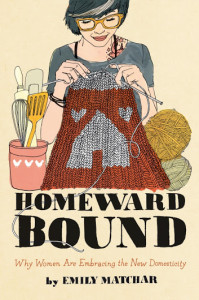 And of course, when America sneezes, Canada catches a cold. So many of the same attitudes prevail North of the 49th. Or at least, my experience was that they certainly did in ultra-crunchy Vancouver.

But I can actually feel the difference between there and here. There is so much less group anxiety.

There are still loads of complaints to be made in the UK about the food security system (horsemeat anyone?), family-friendly workplaces and access to daycare (compared to the rest of Western Europe, that is – it’s still miles ahead of the US, and quite a lot better than Canada), the school system, and the current state of the NHS (which, again, is still nothing short of a miracle compared to the US, and much better than what I experienced in BC).

Something needs to be done. Change needs to happen. The English have certainly earned their reputation as a nation of moaners. But they seem to agree that if you’re compelled to spend effort because of a broken system, it would be unthinkable to spend it all on dropping out of the system. It should be fixed, not abandoned.

At least, I hope the attitude that I’ve experienced here so far is the one that prevails. Because the fact that, despite living in our little socialist paradise, the book is resonating here as well, is pretty fucking terrifying.