I have been tempting the fates with my Timmy’s purchases, since it’s the most convenient coffee stop on the way to work. BUT NO MORE! Not until the damn Roll-Up contest is done.

So far I haven’t won anything in this year’s campaign. But the other day, Neil’s cup won a donut.

And look what happened: 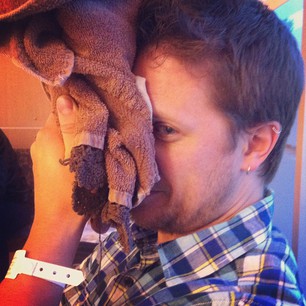 We were running around with the dog in the park near home, and Neil made a sudden about-face without looking, and ran his face directly into a basketball hoop stand. He split open his eyebrow, and we spent the last hours of Easter Sunday hanging out in the emergency room, where he became the proud owner of four stitches in his eyebrow.

I hadn’t said anything about the donut, thinking maybe the curse didn’t apply to him, but clearly there is some crazy roll-up voodoo shit going on with those cups.