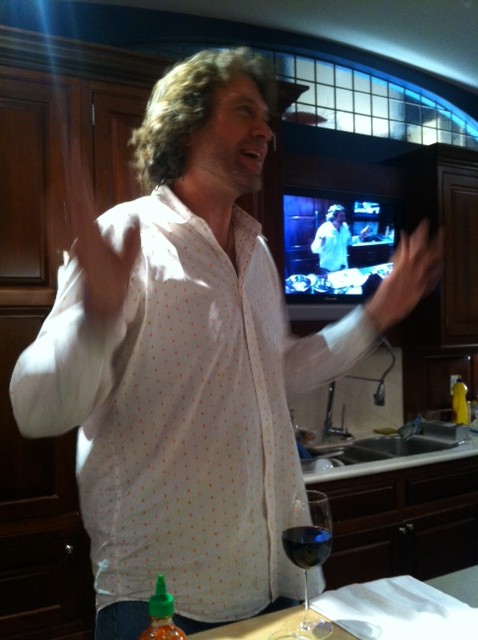 We’ve both followed the Canadian chef since the days of his Chef at Large show, and on this (now rare) night we were actually out without Isaac, his message was poignant: presence, family, cooking, and tradition.

Chef Smith spoke briefly about how he’s noticing the decline in cooking and eating together, and how that coincided with his harried jet-setting lifestyle and the end of his own marriage because he wasn’t present with his family.

And then he splashed me with his cock sauce.

In all seriousness though, it’s so easy (especially with a tiny human around) to lose track of time and push off things like cooking and eating together as life gets busy. One of the big things Neil and I cherish from our own childhoods and want to share with Isaac is a tradition of family meals most nights.

And now that Isaac’s well on his way to eating just about everything we do (new dinner prep question: will it blend?), insisting we share whatever we’ve got on our plates, cooking and eating as a family have taken on a new significance.

Everyone in attendance that evening went home with a copy of the chef’s latest book, and in the spirit of cooking and sharing, here’s my favourite recipe from it so far: Bacon Beans with Baby Spinach.

As a general rule, I don’t like beans, and this dish is a HUGE exception. It’s creamy, delicious, blends (Isaac also gave it two tiny thumbs up), and the only change I’d make is to go ahead and double it right away. You’ll want more.

Slice the bacon crosswise and toss into a large sauce pan. Cook over medium heat, stirring frequently until it’s released all its fat and is brown and crispy. Add the onions & garlic and sautee until they soften. Add the beans and enough water to barely cover them. Bring to a boil, then reduce the heat, cover and simmer until the beans are tender, about 30 minutes. Finish by adding in the vinegar and spinach and stirring until the spinach is just wilted. Salt & Pepper to taste. Devour.