By far the thing that I found most challenging about this trip was planning all the travel. In previous trips Neil and I have gotten really comfortable with the no-plan plan; booking things as we felt inspired and traveling super light.

In our younger, unencumbered days, we spent 3 weeks traversing Morocco and Spain with only a 28L pack each. Same thing for 3 weeks in Thailand. For this trip, we traveled with:

That is still a darned efficient packing endeavor for a month away with a baby – we didn’t bring anything we didn’t use – but it makes that “seat of your pants thing” (at least in my opinion and experience) basically impossible. I mean, we would’ve weathered delays or last-minute changes as best as we could, but why put ourselves through that with the amount of luggage we were traveling with, and our need for frequent pauses to deal with baby feeding and diaper changes?

So I drove myself crazy booking everything in advance, which paid off while I enjoyed not worrying about when and how we’d get to our next stop throughout the trip.

This doesn’t mean I didn’t learn a few things along the way though!

My biggest piece of advice is to research your airlines (not just the outbound flight) and ensure you test your luggage weight and distribution to meet the requirements of ALL of them. We learned that the hard way on the way home.

YVR -> AMS
Outbound, we flew AirTransat, and I was so, so impressed with the plane and the service! We were on a plane with a relatively new interior, comfortable (though small) seats and modern seat-back entertainment. The entertainment system did require rebooting a number of times, but eventually got working about an hour into the flight. We had booked too late to get the Skycot (looked like there was only 1 available on the plane), but were far from the only other people with a baby. Isaac was his usual great self on the plane and alternately nursed, slept or played with one of the toys we brought along.

We also splurged (about $50 each) on the Option+ package, which gave us seat selection, priority boarding, extra luggage allowance, a comfort pack (blanket, pillow, headphones, etc.), three free drinks, a free snack, priority meal selection and service. Totally worth it if you’re flying with them. Though be ye warned: if you have spent the past year mostly abstaining from liquor like yours truly, the amount of liquor WILL get you drunk. And sitting in a small seat on a plane willing the world to stop spinning is not how you want to spend a few hours. 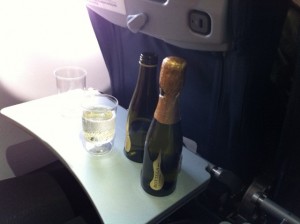 Amsterdam
Once we got to Amsterdam, we followed our AirBnB host’s directions and took the train, then tram to our flat. I am pretty much in love with all things getting around in Amsterdam; the trains, trams, buses, bike infrastructure are all totally swoon-worthy for transit junkies. Car Rental Blues
However, trying to rent a car was just fresh hell. We clearly had not learned from our fiasco in DC and once again attempted to rent a car with an infant seat, rather than lug our car seat along to use on what would be such a small part of the trip.

We originally thought we might drive from Amsterdam to Heerlen, except the rental agencies are apparently only open 3 hours a day and closed on Sundays, and won’t rent an infant seat one-way, even within-country. Don’t even ask about multi-country drop-offs in Europe. I couldn’t find a drop fee less than 500 Euros. And when trying to book, none of the agencies will actually answer their phones or communicate these things to you until you expressly ask, which may result in making a million bookings online, then finally speak to a person, then canceling those bookings and tearing your hair out over it all.

People also looked at us like we were a bit crazy for caring so much about an infant seat at all.

Eventually we managed to rent a car in Aachen (just over the German border, about 20 minutes from Heerlen) with a rinky-dink infant seat. Again, if you care about these things and do not want to lose a couple years off your life trying to deal with the car rental agencies’ ineptitude at this, just bring your own. Also, business opportunity: Europe-wide baby gear rentals. Becauase I’ll be damned if I could find one (I looked!).

Paris & Barcelona
I feel like we spent the majority of our transit time on this trip on the Paris Metro. Because Paris is such a huge city, mastering the metro is crucial if you want to explore. The metro is also almost entirely non-accessible to anyone in a wheelchair (or using a stroller). The only elevator we ever saw was at the Abbesses station (not taking it means climbing approximately 18 flights of stairs), and a few had escalators. Anticipating this, we stuck to using the Ergo carrier when we were doing metro-type trips, and kept the stroller for the walking-only journeys.

While in Barcelona we actually used the stroller a lot more. We covered much less ground since were staying in the Barri Gothic area, so quite close to the center of the action, and it’s a smaller city overall. The stroller was super handy for corralling Isaac, giving him a place to sit and/or sleep as we wandered and dined.

Also, with the Spanish schedule of siesta between 2-6pm and dinner at 9:00pm, it made it much easier to head out for dinner and other adventures, park the strollers beside our table and just let the kids sleep if they were tired. 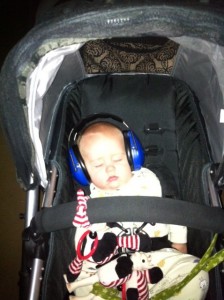 Trenhotel
Getting from Paris to Spain, on the advice of the excellent Seat61.com we took the Trenhotel – an overnight train service operated by Renfe (the Spanish train service). We had a lovely little sleeper couchette for two, complete with bottled water and toiletries, left Paris at 8:00pm and rolled into Barcelona at 9:30am after a lovely breakfast in the dining car. The only challenge we had was Isaac’s awkward sleeping needs. Kids under four travel free and don’t need to buy a separate seat/bed. The floorspace in the car (train seating being as compact as it is) wasn’t big enough for his pop-out bed. We expected this, and figured he’d be okay sleeping in the bouncy seat we had along. We were wrong. Kid likes to stretch out and roll around now. He also does NOT like to share his bed or snuggle with bedfellows. Wants his space to spread-eagle.

This meant Isaac took up most of my bunk for a number of hours while I clung to the edge of the bed so he wouldn’t roll off. Then I woke up Neil and made him switch with me so I could get a few hours of proper sleep.

Even that didn’t sour me to the train trip at all. I LOVE me some train travel. Especially sleeper trains. If I could marry trains, I totally would.

Which is basically the opposite of how I feel about air travel these days. It is barely more than a necessary evil. And even though I was happy enough with flying thanks to our outbound trip with AirTransat, I was rudely smacked back down to reality by our return trips from Barcelona to London, then London to Vancouver with EasyJet and Thomas Cook / Canadian Affair respectively.

EasyJet
I mean, it is what it is – dirt cheap, bare-bones service between major European hubs. The biggest annoyance with EasyJet was the luggage repacking dance we had to go through. Most airlines will allow you to check a stroller, crib/bed and/or carseat for no charge. Hooray! Except, our stroller and baby bed were in the same travel bag, to protect them from being destroyed by baggage handlers. Have you seen what happens to some strollers coming out of the luggage carousel system? I have. It’s not pretty.

This is apparently not okay with EasyJet. The stroller must be left completely unbagged, unless we wanted to pay 250GBP for overweight baggage, which meant our stroller bag had to go through separately and half-empty while our stroller went through on its own. Also, the stroller bag has these handy wheel cutouts, so I was nervous that some things might be lost out of the bag openings while the bag made its way between the plane and terminals (thankfully, nothing was).

I expected some annoyance from EasyJet – I figure a certain amount of hassle is to be expected when flying El Cheapo. Unfortunately, after the stunningly positive experience we had with AirTransat, I was set up for huge disappointment on the flight home.

For all flights to and from the UK, AirTransat sells tickets under a codeshare agreement with Thomas Cook. And Thomas Cook delivered exactly the shitty charter experience I had steeled myself for before we ever left.

We once again had to gate-check our stroller outside its travel bag. The travel bed also had to go through on its own. I will never understand why some airlines force me to check seven separate things through, rather than four. It’s the exact same stuff. It takes up less space when packed together. No item I’d packed was over 50lbs. It just means that because we have four hands to carry things (not seven), we need to unpack and re-pack on the floor before and after each flight.

It’s like they want to give me an aneurism.

I do have to say that the in-flight staff were excellent. They shuffled passengers around the mostly-full flight, upgrading the seats of people seated in rows where people were traveling with lap-babies, so that the four families with wee ones had some extra space. 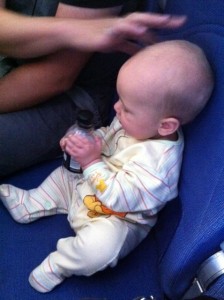 Good thing, too, since the seats on our shitty tin can did. not. recline. That’s right. The braintrust at Thomas Cook thinks it’s ok to subject passengers to a 10 hour flight without the ability to recline even a little bit. Headsets were 2-pin style (most other airlines have switched to 1-pin, so you can use your own if you have them). Meals were tiny, water and snacks were sparse (so glad we’d loaded up on our own!). The temperature fluctuated wildly, and we oscillated between sweating and shivering.

I’ve really not had such a crap flight experience in a long time. And while it’s generally bearable on a 2-5 hour flight, I will make an effort NOT to ever fly internationally with Thomas Cook ever again.

Overall, though, we really did have a great time on our trip, despite navigating through and between cities. Even though our things didn’t always travel the way I’d intended, we never ended up having to pay extra baggage fees, and none of our things were lost or broken.

It was stressful enough, though, that I’m totally taking the easy route on our next vacation and booking an all-inclusive. One location where we dump our stuff and park our butts for a week of real relaxation. Mama needs a margarita.