As I mentioned in my last post, we were heading to the Netherlands to visit some family. My mom was born in Holland, and I’ve got more relatives there than I can count (eg. my mom has 31 cousins, nevermind aunts, uncles, second- and third-cousins and cousins 2 and 3 times removed) scattered throughout the southernmost province of Limburg.

Going from Amsterdam to Heerlen (our HQ for our time in the south, the town where the relative I’m closest to, Frans – my cousin once removed – lives) was quite a city mouse/country mouse transition. But it was still quite different from going to “the country” or small towns in BC, where we go from city, to sprawl, to acres of vast wilderness with settlements sprinkled here and there. It’s much more similar to the east coast of the United States, where small towns are distinct, yet still quite close together, and the boundaries aren’t always obvious to outsiders. Except in Limburg, the towns are surrounded and separated by small farms. We actually spent our first afternoon cycling in and around them, falling in love with the bike routes through the countryside. In a very strange way, going to Limburg felt like coming home. My mom came to Canada with her family when she was six. My dad’s family has been here for at least a couple generations already — with origins in England, Russia and Germany. I don’t have the close ties to a “motherland” that a lot of other Vancouverites from different ethnic backgrounds do. I don’t speak Dutch in any variation (my family’s dialect in the south sounds very German). Yet so many of the words I heard were familiar, after listening to my grandparents and mom speak to each other my entire life. And while I wouldn’t normally say someone in Canada “looked Dutch” compared to any other person of Western European descent, everyone looked like they must be “some friend of Oma & Opa’s.”

We did manage to see quite a lot of the historic and notable sights in and around Hoensbroek and Heerlen, such as the Kasteel Ruine and Velvet Grotto in Valkenburg, the Drielandenpunt (where the Netherlands, Belgium and Germany meet) in Vaals and Kasteel Hoensbroek.

We also splurged (thanks to the International Hip Hop Dance festival ensuring everything else reasonable was fully booked in Heerlen the night we arrived) and spent a night at Kasteel Terworm.

But by far the highlight of that week was visiting some of the family landmarks I’d grown up hearing so much about.

My great-grandfather (My Oma’s father) built this shrine in Hoensbroek: And one of my grandparents’ big “What-If” wonders is what would have happened if they hadn’t come to Canada, and instead bought his house and stayed in Holland (I, personally, vote for moving to Canada, since without that, I wouldn’t exist). This house, as a matter of fact: Which is still owned by the family who did buy it from him 58 years ago.

One house is still in the family, the old farmhouse my Opa grew up in. His sister (who immediately pegged me as my mother’s daughter, despite not seeing either of us for decades) still lives there, and the stories from Frans and Jos (another cousin-once-removed) about being yelled at for running through the roof and leaping into the cow stall and pig-pen suddenly came to life.

My Opa in the entrance to the farmhouse courtyard in the 1970’s (I think?): 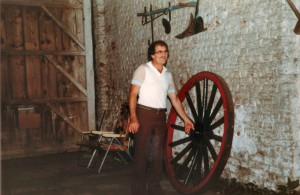 With the original floor tiles from its construction in the 1700’s: I’ve been talking for years about going to the Netherlands to finally see where a huge part of my family originates. Probably most of my life. And while semi-rural Holland isn’t on most people’s European must-see list, I think I’ll remember that part of the trip most fondly.

One thought on “EuroTrip2011 – Part the Second – Limburg”