I’ve officially made it to the third trimester! We’re in the home stretch, which is alternately awesome and terrifying. In fewer than 100 days, we will have a tiny human (definitely of the boy variety, as an update to that last post) of our very own.

There’s a well-established saying that the 2nd trimester is the “honeymoon phase” of pregnancy, and I have to say that definitely applies to me. (And if you are finding this in the misery of the first trimester, I feel for you, I really do! Be kind to yourself, fight for the treatments you need to make it through the bleakness. It’s okay.)

After we finished with the “summer of death, 2010” I’ve actually spent the past number of weeks feeling surprisingly good. I joked a lot that the best part about it has been forgetting much of the time that I’m pregnant. Not so forgetful that I’d be six cocktails in before going “oh shit! the fetus!” but that the whole “host to a parasite” thing was no longer interfering with my ability to lead a normal life.

And so, because it’s been a not-unpleasant ride for the past while, and in the spirit of not being a total Negative Nelly about this whole experience, I present to you, the 2nd trimester list of things that don’t totally suck about being pregnant:

• Obviously looking pregnant, as opposed to looking like I’ve had a long and sordid affair with a donut shop that didn’t end well. Which goes along with…

• Not caring about those “last 10 lbs” for the first time I can recall in my adult life. I’m trying to enjoy it, as I assume this laissez faire attitude about the current size of my ass will immediately revert to its previous state approximately 8 seconds after I see my lower half in a mirror the first time after giving birth.

• The ease of dressing myself. Nobody seems to expect much from pregnant women in the wardrobe department. Which makes it that much easier to feel sartorially confident. Also, the 2nd trimester is when maternity clothes are their most comfortable and flattering. In previous weeks and months, most maternity fashions still hung on me like so many circus tents (even though my pre-pregnancy clothes were laughably too small). Currently, they fit like a glove. I am expecting soon I will be stretching them to their limits and otherwise rolling in Neil’s sweatpants.

• The unending string of compliments. It seems the universally declared “thing that is appropriate to say to a pregnant woman” is “wow, you look fantastic!” And you know, I don’t care if you really think that or are just trying to say something that won’t get your head bitten off. I approve, and thank you.

• Finding out the sex of the fetus! It’s really no secret I hated and resented this little parasite for the early part of pregnancy. I looked forward to having a kid at the end of it all, but was decidedly unimpressed at the 9-month trial I’d be enduring while waiting for the kid to arrive. Everything was such crap that it became really important to me I get something out of it that was for nothing other than my own selfish desires. The gender screen was it. Now that I know there’s a wee boy-to-be in there, I feel like I’ve actually, finally, bonded with him in some small way and have gotten over the mental hurdle I needed to in order to start actually planning and being excited.

I have been assured by those who’ve gone before that I am in for another slow, downhill drag back into misery, culminating in the ordeal that is giving birth, but so far I’m mostly ignoring that part and continuing my independent research study (sample size: 1) on whether the intense sugar cravings are really a body’s way of trying to compensate for all the sugars it’s missing from lack of alcohol input. 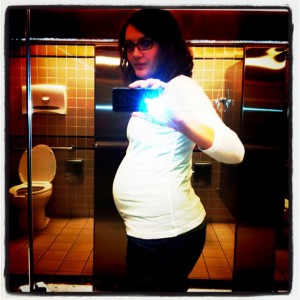 Someone asked for a belly photo, and when I realized I didn’t have any, I snapped a quick one in the bathroom at work. You’re welcome!