It seems appropriate to leap into September with a book review, no? A little what I read over the summer, if you will.

And one book I went back to a few times over the past number of months is How We Lead Matters by Marilyn Carlson Nelson. I received it as part of the One Degree Mini Book Expo: Business Edition, and I was awfully excited to dive in. 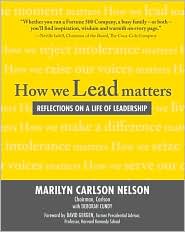 I’m at a point, professionally, where I’m finding myself more often in a leadership position. My style so far is… bullish. I’m definitely the no-nonsense type, and I often make the classic foible of focusing on results over feelings when maybe I shouldn’t, at least not exclusively.

I’ve been called out for being an insensitive, hardass bitch a time or two. While I don’t really mind that, I am looking specifically for leadership resources that will help me become a trusted manager with a focus on results rather than simply a brutish taskmaster.

The Brute = Bitch issue is also a leadership perception issue that is unique to women. Maybe it’s not right, but it’s there, and something that female leaders need to be aware of. I would like to hone a style that is authentic to my role as a woman as well as a leader.

So I thought notes on leadership from one of the first female CEOs would be an excellent study in ways to build that style.

Unfortunately, it fell a bit short for me.

Rather than reflections on a life of leadership, the book seemed to me to be notes on occasions my actions resulted in an act of graciousness (sometimes on purpose, sometimes not), which paid off later.

I missed the opportunity to read about someone’s struggles (internal and external) and how they were overcome. The short stories (each about 100 words long) don’t lend themselves well to true lessons. For example: The author’s daughter died, she was devastated, she grieved, faced the idea of her own mortality and decided with her husband to live their lives celebrating every day, because her daughter didn’t get the chance to.

Not that a child dying isn’t tragic, but I don’t know a single person who has managed to pick themselves up out of such a horrible event and NOT been inspired to live their lives with a bit more purpose. What I want to know is how did she finally get out of the dark days? How did she finally move past the pain into the point of graciousness? And what were some of the struggles she made it through and lessons learned on the way?

The entire book is missing the hard details. The things we struggle with every day. How do we make it through? How do we pick ourselves up out of those instances we wish we could forget of occasional embarrassment, incompetence and insensitivity?

The book’s “lessons” are all shared from a point where hindsight has long since provided clarity and obviousness. Do the right thing. Thing is, that’s not so easy in the heat of the moment, and such simplistic advice offers cold comfort to those of us in the trenches.

This book annoyed me.

Until I started flipping through it one more time to write this review.

Maybe that is the lesson. What happens in the trenches, those clumsy, embarrassing missteps are not what will matter in the end. What will matter is that, despite the mistakes, you did the right thing. You stayed focused on what’s truly important, and did not let disappointment or difficulty or disaster dissuade you.

2 thoughts on “Book Review: How We Lead Matters”